This post has nothing what so ever that relates to Machins I know, but I hope that you find it of interest just the same. 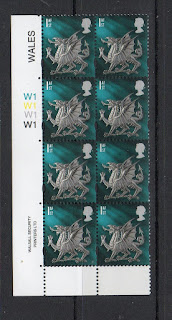 One of my other sins of accumulating what my late wife called "stuff", was that of collecting Pictorial Regionals. I thought that they were quite nice designs and I liked the fact that they were completely new stamps. A new definitive from four different regions, different values and a collection from day one of the issue. Every collectors heaven, not my missus though, god bless her. Her favourite saying was, "I spent to much on stuff". In one ear and out the other :-)

I decided at the time to obtain them in cylinder blocks of 2 x 4 because the borders incorporated the country they related to, the cylinder numbers and the actual printer. Which was a good idea as within a short period of time the contract was then awarded to De La Rue. Dot and no dot blocks added more interest. Later they also changed the actual design, as borders were added and several new values issued due to postage rate rises which is another story for another time.

Now according to the SG Concise the DLR  issue shown are exactly the same stamp as the Walsall issue, which myself cannot quite fathom their logic.

Quote
"New printings of Nos W83 and W84 produced by De La Rue instead of Walsall were issued on 28th May 2003 and 4th March 2003, Stamps from these printings do not differ from those produced by Walsall"
End of quote.

Poppycock! Different printer different stamps, or am I being to pedantic? I can see that single stamps with no marginal markings would look the same. But Concise has never been the best catalouge for specialist collectors. As usual I have got a bit carried away and diverted by a long way from what I originally wanted to show on this page, so I will now try to get back on track. Whilst going through my stock books I noticed that this 1st class Wales SG W84 De La Rue printing issued in 2003 has an extra dot in the top of the box identifying the black cylinder. Left of stamp 5 See enlarged images.

Nothing to get excited about I know, but it is something different to the norm. I like to query anything different. I seem to remember the same type  of thing on certain Machin cylinder blocks, but I am not 100% sure of my facts. Perhaps these were missing dots that were added.

I  do not foresee that it will make the block anymore valuable, but it does add a talking point, and something to write about in this case.  I might also mention if anyone wants it for their own collection I am open to offers of face value +. Just e-mail me gbmachins@gmail.com

This is also a chance to get involved in this little debate and help me out at the same time. I have a question. Answers in the comments section please.

Does anyone know or have some sort off idea how or why this has occurred? The size and shape of the dot looks to be added or engraved. I am only guessing again here, perhaps a bit of grit has deposited itself on the cylinder.