This has now been taken off the market. I guess it was a bit to steep for most collectors pockets. Anyway, many thanks go to the people who enquired. 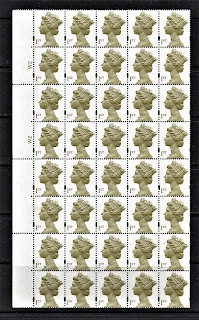 This is a very interesting exhibition piece showing 40 Millennium Machins in the form of 4 x un-cut panes of 10. The number of the cylinder W2 W2 it is present twice in the left selvedge. 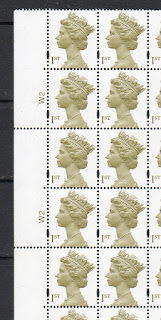 All indications point to the fact that the source of this block is from un-cut part of an original primary sheet used in the make up of booklets printed and manufactured by Walsall Security Printers.

The House of Questa and Walsall did however print Millennium stamps in sheet form, but these were only intended for the use in retail booklets in multiples of ten.

The left phosphor bars on stamps on this block are 9mm, of this 4.5mm is overlapping into the selvedge. The remainder of the stamps have 9mm bars stretching across the stamps forming  2 x 4.5 mm side bars on each of the stamps.

This perforation type is AP4 (R) Rugby Ball type ellipse, (one ellipse at the left and one at the right) they are approx. 3 perforations in length, set two perforations up from the bottom of the stamps).These perforations are (the norm for Walsall booklet panes x 10 Millennium Machins) which are 14.75  x  14.  The cylinder numbers (W2 ) appear in row 2 and row 4 in this uncut block. There is no phosphor cylinder number shown.  Paper type is OFNP with PVA lay flat gum and the phosphor  is  DG A2B 2 which has an after glow when viewed under long wave ultra violet light.

I believe that there are other blocks of 20 and 30 stamps known of this type but this the only block x 40 that exists in private hands.

For clarity it is known that on the opposite side of the (on the original) primary sheets the marginal stamps had 6.5mm wide phosphor bars, 2mm of which overlapped in to the margins. It is to the best of my knowledge that no blocks with 6.5mm bars in the margins exist.

The direction of the print is inverted. The margin is perforated through the top and bottom edges of every 2nd row and there is a single extension hole in the selvedge in the alternative rows.

Where the complete extension of the perforations exist through the margin, this is usually the tear or cut line. Indicating that this is the format that the single panes of 10 must conform to before they are inserted into the booklet covers.

Booklets panes with W2 cylinders were printed in the latter period of the Millennium year 2000 . W1 cylinders were  used prior to W2  in January,  these were in use during the early months of the issue.

With the information above, every indication confirm that this is a genuine piece from a actual primary sheet printed with Cylinder W2 W2. The GB DSB SC ( now MBPC ) code number for each individual panes of ten is DP301.

Further Information which may prove helpful

Although the definitive Machin panes in these booklets were the same pane as the one described above (DP301).  The two stamps at the right of the panes were removed by operatives at the printers during the make up of the booklets, reducing the Millennium Machin definitive panes to eight.  Some of these millennium Machin booklet panes of 8 had W2 cylinders as they were printed in the later months of the year 2000.