Trade in or use older Machins?

To be perfectly honest it is easier and less stressful to trade in older stamps rather than use them for postage. Since January I have had several complaints from buyer that they have had delivery of mail held back unless they pay a fee of £2.50 for under paid or invalid stamps that I have used for postage.

Royal mail urge us to use all older stamps for postage whilst it is still possible to do so but refuse in lots of cases to accept them as genuine. My latest case (just last week) was one of a second class letter sent to Scotland. It had 2 x 33p ACP Machins and 2 x 1p PCP Machins attached which are still legal and the correct amount ie:68p. This was held back from delivery and the recipient was asked to pay a £2.50 fine. Refusing and armed with a UV lamp and stamp catalogue she marched up to the sorting office and argued her case.

First this grouchy counter clerk implied the stamps were forgeries, this was disproved, they then argued that the stamps were used previously. This was also disproved. Eventually after bringing in the management they released the envelope without collecting the unpaid fee. In her words "Philatelists 1 -  Royal Mail 0"

A second case very similar to the above with several low value Machins attached. The recipient refused to pay. After 7-8 weeks the letter was returned to sender (me) via my letter box by my postman. The sticker with £2.50 underpaid still in place and return to sender written on the packet in biro, the stamps were also cancelled in biro. The best part of this story is there was no actual charge to return it. I could have argued this case that they owed me compensation but decided that for 85p it was not worth 2 to 3 hours of my time.

How can they get something so simple so wrong?

Send a message Victor Meldew style to Royal in four words or less.

I DONT BELEIVE IT!

Over the past few months I have been very busy supplying collectors across the globe both privately and via auction sites with quality Machins. It was not until I went through my vast collection of cylinder blocks and booklets that I realised that I had literally tons of duplicates. Some of which are (were) quite rare or difficult to find. A few of them I had to re classify such as GA cylinder blocks with Jet phosphor, these were marked up simply a Gum Arabic.

Admittingly catalogues have got more detailed over the years so these issues were easily missed. The moral is,  everyone can miss identify or make mistakes. Some of these issues have been sitting around in stock books since the early 70s un noticed. I am now in the process of re examining all my early material. Machin Pre decimal booklets and 10p booklets. The Pre decimal and "post boxes and uniforms" are a challenge as a lot of the individual panes were added and issued in error. OCP instead of FCP, PVA gum instead of PVAD etc. 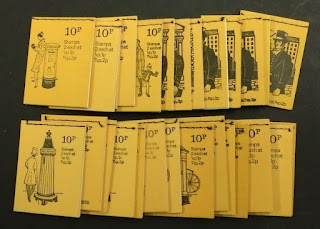 I may even add a few more just to see if I can find some more. No doubt about it I am still a sucker for Machins. The image (lot) above was found on eBay so I just automatically put in a bid. Even if I do not win,  it is still a thrill of a chase all over again.

Chugging through eBay last week I find that there are tons for sale and the majority are not attracting any bids. The lots that do get bids are selling quite cheaply.

It makes me have food for thought as cover producers are still advertising their wares (be it the more modern issues). The cover below showing the latest Windsor postmark showing Machin definitives with datamatrix codes is offered for £25.00.

I am not saying this is expensive, as the producers have to do a lot of work in creating the design and they still have to make a worthwhile profit. Saying this I for one would not buy it. I have been taken for a ride in the past with covers. After selling my collection for far less than it cost me to accumulate I vowed to myself I would not make the same mistake twice.
This is my personal view and I do not mean to disrespect anyone that does still buy, collect and produce them. After all we are are all different in our needs, wants and habits and it is still a free country.