Robert Bostock sent me an email last week, the content I found most unusual. Thanks Robert for bringing this to our attention.

"While doing a bit of research on Hedgecoe and his claim to have widely influenced the Machin head, I was surprised to come across this bas-relief sculpture by Australian Leslie Bowles (born 1885), used on QEII definitives for that country as early as 1955, 12 years before the first Machin stamps.
More than a passing resemblance with some of Machin's attempts at the head. Did he therefore really need Hedgecoe's photos to help him achieve his portrait and might he not have been at least a little influenced by his Australian cousin?"
Comparing these Preliminary stamp designs with the Machin bust, I also find the likeness to Machin stamps is uncanny. Especially the last one (7½d) bottom right.
Does anyone have any m 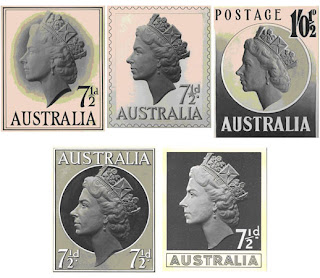 ore information on the bust? Was it, I wander (as Robert points out) used by Machin in conjunction with the Hedgcow portrait to influence his own work ?
There is an English connection, Bowles who died in 1954 (one year before the Australian stamps were commissioned ) studied at the South London School of Sculpture and the Royal Academy School and became an assistant to stamp designer Betram MacKennal, another expatriate Australian sculptor working in England.

For the full story and image of the cast skip over to this website.
at 04:59

If I recall correctly, there's no mention of Machin referencing this sculpture in Douglas Muir's book, A Timeless Classic. That doesn't mean that Machin wasn't aware of it, but it would indicate that Machin never left any record of that sculpture being an influence.

It is possible that this aUSTRALIAN cast was based on a Dorothy Wilding full profile photograph. It tends corrispond to the the same years -1954-1955.

Dorothy Wilding had taken a full profile photograph at the same time as the three-quarter profile used for stamps. (is this the profile used on Australian stamps)

Three artists were invited to provide frames – John Brinkley, Eric Fraser and John Farleigh – and their designs were submitted in September.

The Stamp Advisory Committee asked Farleigh to amend his design, adding to the frame. After The Queen’s reaction to Cecil Thomas’s Tudor Rose design for embossed envelopes Brinkley was asked to make one of his less fussy. Both of these were then proofed from February 1954.

On 16 July 1954 The Queen approved John Farleigh’s design. The die was then engraved at the Royal Mint. The artist requested various modifications during this time, but the first postcard was eventually issued on 6 April 1955, with lettercards following shortly after.

The designs by Thomas and Farleigh appeared on all British postal stationery (other than airletters) until they were replaced by versions of the Machin head in the late 1960s.