It is now over 50 years since the first Machin definitive made an appearance and I doubt if anyone under the age of 50 has any interest in in their history or even knows what a Machin definitive is for that matter. It seems a shame that collectors of stamps and people that study stamps in particular (philatelists) are now becoming a dying breed.Over the years much has been written, discussed and catalogued but 50 years is a long time so Pre Decimal Machins are by the large majority a forgotten entity.

Modern self adhesives are fine but I personally am still hooked on the earlier lick able varieties. So without a to do I will get back on topic.

I have just acquired a bunch of early Pre Decimal Machin booklets (about 25 booklets all different) for a nominal sum of 25.00p.

Perforations are still a lot to be desired on early stuff and it is touch and go with this what you get. But saying this if you look hard enough you can find some great bargains and a few hidden gems.

The catalogue value for my purchase is probably in the region of 200 pounds Stirling, but I did not buy them for the the catalogue price. I wanted a new challenge and the opportunity to study the contents. After just a half hour and a quick scan through the lot I have found two 6 x 5d panes with missing phosphor. More about these in a later post. Lets get back to the first Series. 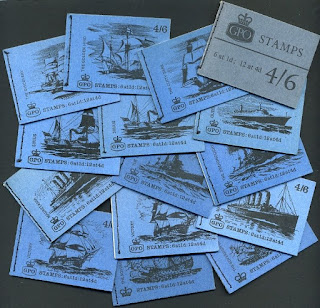 These are the 4/6d (old money) Machin booklets the first is SG LP45, these were issued by the GPO in May 1968 and they had a slate grey cover similar to the wilding booklets.

The contents they contained were originally 12 x 4d sepia and 6 x 1p . In July of the same year they changed to a pictorial cover with a composition showing famous ships.

The contents of the panes changed throughout the series 4d with one centre bar then again the 4d changed colour from Sepia to vermilion with a CB or side Bar.

This 4/6d series runs from SB LP45 to  SG LP59 and they were issued between 1968 - 1970. Some designs were issued twice with the same cover, the difference to the catalogue number can be found on the rear cover where the changed dates of issue can be seen. The later dates of the reprinted duplicate covers are catalogued 2 - 3 times as much as the original. See what I mean about study?

Although these are 50 odd years old you learn something new every day. Well I am, I had no idea about reprints.

My next job is to check the gum on the panes as in certain booklets panes were issued with both mixed Gum Arabic and PVA. There are also different perforation varieties and cylinder panes to look out for, not to mention flaws.

If you are under 50 I guess you prefer your X box, but if you are like me (an old dodderer), enjoy your stamps, I certainly am.

This post is just to show what you can get for a few quid on eBay. Hours of enjoyment without the telly or that latest electronic gadget :-).
I will let you know how I get on with my progress as I make my way through them over the coming weeks.

As is so often the case I found the answer not long after I'd sent the previous comment, at https://www.gbstampbooklets.com/queen-elizabeth-ii/machin/

'Starting in May 1968, pictorial covers were introduced. The illustrations were commissioned from eminent artists: Rowland Hilder and David Cobb (ships), Peter Gauld (homes), Harry Titcombe (birds – with his initials “HT” in every design), David Gentleman (explorers), with layout and typography by Stuart Rose. A 5s booklet was issued in March 1970 to publicise the Philympia International Philatelic Exhibition to be held in London in September of that year. The cover was designed by Peter Gauld, and all adverts were related to stamp collecting.'