I know, we are still only a quarter way through 2009 and Royal Mail are still adding new issues to the preliminary list published last year. When will it end? In order not to keep us in suspense and perhaps open a savings account, (it is only March 2009) and they (RM) have now released their preliminary programme for 2010. I hope some of you still have those deep pockets.

One issue they have not listed, is the 1d black which was a surprise to me, but I guess this was commemorated in 1990 and 2000. The 170th anniversary of the introduction of the world's first postage stamp falls on on May 6, 2010. As this issue has not been taken advantage of I guess they have milked it already and they do not feel the need. 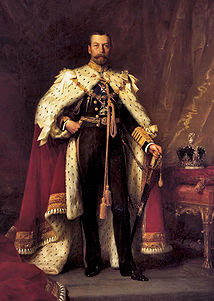 Instead in May, to correspond with the Stamp Exhibition, 8th - 15th May 2010, to be held at The Business Design Centre, Islington, London, they have informed us that they will be issuing stamps commemorating "King George V" .

This is a year long programme of exhibitions, events and activities to mark the centenary of the accession of George V, who we consider as "the philatelist king." The British Postal Museum & Archive is co-ordinating wider festival events and activities at venues across London. This should please you Michael (CDD), and you thought like the Wildings issues this was a closed chapter :-) !!

February: Centenary of the Girl Guides
350th Anniversary of the Royal Society.

May: 2010 London Festival of Stamps exhibition. Centenary of Stamps of King George V. Expect tons of stuff to follow, and expect some in the run up to this!!
Great British Railways
June: Children's Books, and I expect smilers for kids?

July: Nothing reported but expect something!