An exhibition of The Queen at National Portrait Gallery will take place during 2012 as part of the national celebrations for the Queens Diamond Jubilee. Celebrating 60 years on the throne.

The gallery will mark the occasion with a collection of special portraits of the monarch, created during her lengthy reign.

From her profile on stamps and coins to full length commemorative portraits, the image of the Queen has been photographed, painted, and recorded in a number of different ways over the years. Capturing a number of different ages, sittings and formal occasions, the exhibition aims to explore the way in which the Queen has been represented since she came to the throne in 1952.

Works of art to be included in the exhibition about The Queen at National Portrait Gallery are 60 different works, one for each year of her reign. Formally painted portraits, official photos, press images and commissions by contemporary artists will all be on show, giving visitors the chance to witness not only changes to the Queen over the years, but changes to the styles of representation she receives. 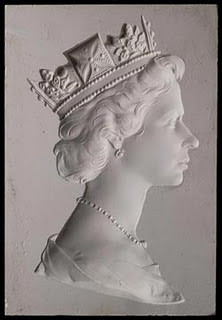 It has been said one of the most popular images on show throughout the exhibition is the portrait of the Queen, presented in 3D by the light artist Chris Levine. Entitled Lightness of Being, the work was created in 2004 and shows the Queen in a formal setting, wearing her crown and a fur trimmed robe, but with her eyes seemingly shut.

It will be interesting to see if the Machin portrait is included the line up. Alongside the portraits by various famous artists, The Queen at National Portrait Gallery also features archival material, postage stamps are said to be included so it is feasible some reference to Machin may be made.

Perhaps the the mould which is held as one of the Treasures of the Archives "The Machin Head", sculpted and cast by Arnold Machin will be shown.

Art and Image at National Portrait Gallery will take place from Thursday 17th May - Sunday 21st October 2012.
at 04:12