Stuart Geddes has sent  me short email suggesting that the December issue of the Philatelic Bulletin have printed a statement concerning a new large £5.00 Machin to be issued on 6th February. This is in relation to the 65th anniversary of The H.M the Queen,s Accession to the throne. 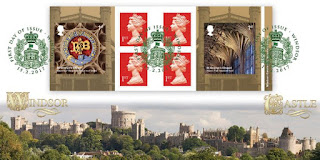 Presumably, with reversion to red NVI 1st from the purple Long to Reign Over Us, this will be the new dark red (SG = Bright scarlet) with new security code MCIL M17L.