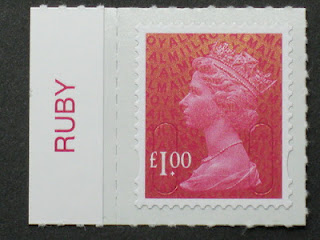 Ruby,Crimson and Carmine are all shades of Red, Larry and Ian are correct Flame IS a shade of orange.

What ever colour Royal Mail uses for the new 1st class stamps will in my mind be a improvement on the previous colour of Gold.

It was nice and something different when gold  first came out, but I do now feel after seeing the diamond jubilee Machins,  gold now looks a little on the bland side. This is only my opinion, I have spoken to others in the past who tended to agree with me. I wont go this far....One person suggested gold was on a par with drab.

The £1.00 Ruby is one of my all time favourite Machins. And I would love to see the 1st class revert to something on the same lines. Bright and vibrant.

Another favourite of mine is the 2010 festival of stamps double head showing King George V and the Machin portrait (again this is a shade of red or plum).

What of other red Machin stamps? I can think of a few off the top of my head, the 4d pre decimal and the 8p decimal value come to mind, the 62p value from 2009 was a shade of red, the 25p value was also a nice shade of red at one time.

The 2009 recorded signed for stamps for are perhaps the nearest to compare to the colour red , these are a nice shade. Perhaps if red is to be used for the new issues they will bear some resemblance to these with the yellow stripe removed? If these stamps are still in use next year It makes some sort of sense, or does it?

The Diamond Jubilee stamps stamps still take some beating for design but what ever the outcome of the final colour I have a feeling the new Machins will look spectacular in a shade of red especially when they are incorporated with the iridescent overprint.

the future looks bright (pun intended) lots more Machins to collect (coded or not) so roll on 2013 and be sure to watch the pipeline for more news.

I haven't compared them before writing this, but when I first saw the Recorded Signed For stamps, I regarded the colour as being exactly the same as the 1st class Flame!

Oh, and personally I think the Diamond Jubilee colour is terrible, being too close to the £5 (not that anybody sees these nowadays!) it's just wishy-washy.

I would have chosen Royal Purple, or silver for the diamond colour.

I believe the Recorded Signed For stamps were announced as being flame, the Matthews color previously used for first class.

Whats in a name?

Flame is also called orange/red, the 8p Machin is actualy red but it is also described as roseine in certain catalogues.

other stamps are listed as roseine, are these also red?

The Ruby stamps are more of shade of plum and the 25p stamps mentioned are a salmon colour.

As you say, what's in a name. The only important thing is that reliable reports aay that this is NOT going to be the same as the previous 19p/24p/1st class reddish-orange/flame colour.