Michael Dodd (pictued below) is not only a handsome chap ;-) but also fellow director and the publicity officer for the Internet Philatelic Dealers Association. He may not even know this himself, he had a mention in relation to his sponsorship of other collectors in the March 2007 British Philatelic Bulletin (vol. 44, Number 7) . Have you read it Michael?

In conjunction with the hobby of helping other collectors, and collecting stamps him self, in his spare time he runs a stamp dealing business CDD Stamps, Sydney, Australia and he also writes an interest

Just in case you have not visited his blog, http://blog.michael.dodd.com/blog here is the link. His musings go back a long way, as far back as 2005, so if you get the chance and have an hour to spare, click on the link above and read what he has to offer.

You will not be disappointed as his knowledge of philately is vast and varied , his blog is some times serious, some times humorous but always very interesting.

Back in October 2006 he wrote about a subject regarding a former post office here in the UK that has been converted into a public house. The name of this Pub believe it or not is "The Arnold Machin"

As this year (June 2007) is the 40th Anniversary of the Machin stamp and the late Arnold, who was was the designer will no doubt be in the philatelic news quite a lot over the coming months, deserves a paragraph or two.

Not to mention his image pictured below, rather than that of his plaster cast his photo will be introduced on millions of special first class stamps. for more information on these stamps see my previous post on the Machin Generic Smilers sheets.

A question I ask myself is "Will all these Royal Mail customers who stick Arnolds picture on a letter even know who he is I wander? Will they the public even see one of the stamps? I doubt it as they are only on sale as generic sheets, miniature sheets or prestige booklets, which are, as we all know designed and produced for collectors only. 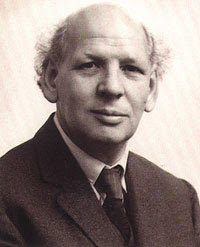 Although I have stated I would have preferred Machin definitive stamps myself on the generic sheets, it is a bit of a shame really, that they are not available in normal sheet form, not much of a tribute to the man who's work is pictured on 180 billion stamps designed and printed with his name.

The pub owned by the J D Wetherspoons chain, near Stoke on Trent is a fitting tribute to Machin who was born and once based in the Potteries where the he worked for Minton and Wedgwood, which is as you know are the famous china and pottery companies.
I am wandering if the owners of this pub are aware of The 40th anniversary of his work and if they have anything planned in the form of a celebration to his name and the pub that bears it.

Perhaps they are are giving away free stamps, or better still free beer :-) . It might just be worth while paying a short visit just to take a few photos of the decor if they are.

I have been informed by a reliable source that it has not changed much from when it was A Post Office. The old post box ( left of the picture) is now used as a letter box for deliveries of mail rather than that of out going. There is a plaque of some description to the right of the door. The rest of the outside looks a bit spent and grubby, more like a old local police station to my mind, but saying this I am informed the inside is not so bad.

They have disposed of the queue rail, also the clerks and replaced them with a line of customers wanting a tipple from a bar person instead of a teller issuing postal orders or a book of stamps.

It is written that "The decor is not badly done out, as per most Wetherspoons. There is a small relation to postal history in side and a few pictures relating to the Machin theme on the walls, but nothing special.

Not that much really to remind us it was actually a working Post Office at all. Unfortunately its not a stamp collectors haven or even a collectors meeting place, it's the second home of various alcoholics and derelicts after a cheap pint."

If the Royal Mail wanted to pay a proper tribute to this man, I suggest they plough some of the millions made in profits from the sale of his stamps - re purchase this building and convert it into a museum to his work and memory. Now that is a nice thought!!
at 05:27

Roy, brilliant piece,, and of course. many thanks,, you flatter me.. ok another bottle of scoth next time I visit hee hee .. best wishes.. Michael