There are so many counterfeit stamps in circulation these days it is difficult to keep up. I have just received a small supply of these 1st class Large Machin counterfeit stamps which arrived in horizontal and vertical pairs. I presume they were originally on a sheet.

Although these are good enough to fool most of the general public they certainly do not fool the specialist Machin collector, or the post office for that matter.

SPOT THE DIFFERENCES:
1:  No year codes or source codes
2:  The ellipses appear to have straight sides
3:  There are nine straight lines of iridescent background text instead of thirteen wavy lines
4: The Perforations appear to be sharp rather than the norm which are blunter
5: There are no phosphor bars or afterglow under UV light
6: They are on very thin backing paper, not card with no royal mail text. 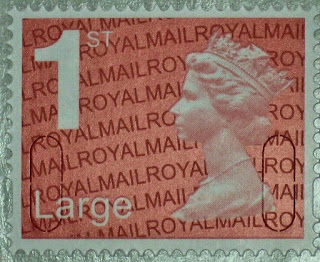 Above is a scan of the item, and below is a scan of a genuine stamp, there may be more differences which I have not listed such as brightness of the paper.
If you would like a copy for your own collection I have listed a few of the extras on eBay, both singles starting at 95p and pairs buy it now at £2.25. I must stress these are sold as collectors items only and must on no account be used for postage. 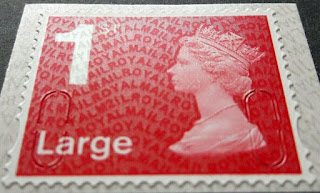 The first class Large have somewhat done my head in, there are a multitude of them

1st Large with extremely good ‘ROYAL MIAL’ as legitimate example except for spelling mistake, though with no year or source code

1st Large with extremely good ‘ROYAL MAIL’ as legitimate, though with no year or source code on plain baking paper

1st Large with extremely good ‘ROYAL MAIL’ as legitimate, though with no year or source code on undulating ‘ROYAL MAIL’ backing paper

That is quite a list. A mini collection on its own.